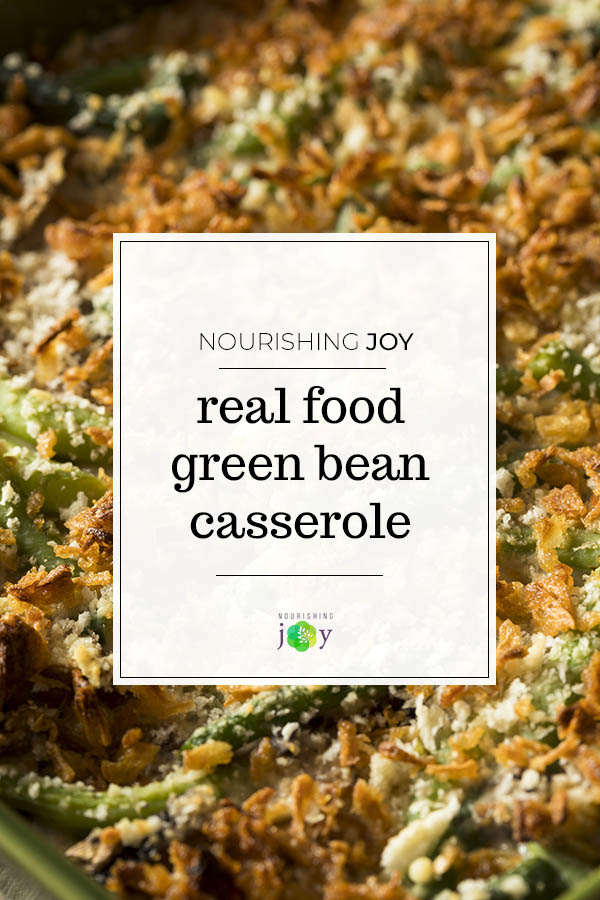 So, what are the essential parts of any green bean casserole?

The green beans, the cream of mushroom soup, and the french-fried onions, right?

This beloved casserole has earned a place of honor on our Thanksgiving table each year, but up until a few years ago, it consisted of opening cans of green beans, opening cans of soup, and yup – opening a can of french-fried onions to whip up and bake to perfection.

But as my family has been on our whole foods journey in the last few years, Green Bean Casserole put me in a conundrum – what to do with our beloved favorite?

Well, as long-time readers of this site know, I have a love of reverse engineering, so as I was writing my cookbook – The DIY Pantry – I made sure there were solidly good recipes for all of the above-mentioned convenience foods so that my family and yours could once again indulge in this classic holiday side dish.

So let's take a quick look at each of the ingredients so you can pull this together in a jiffy:

Beans are pretty straightforward – simply use your favorites! Whether you have fresh beans available, frozen beans, or choose to use canned, french-style beans, use whatever green beans you love.

The only caveats I have are that fresh and frozen beans will need to be boiled or steamed first so that they don't release their water into the casserole (rendering it more watery than you may desire) and if you use canned beans, try – if possible – to use a brand that uses a BPA-free lining or packs their beans in glass.

The Cream of Mushroom Soup

And thankfully, a thick, condensed, homemade cream of mushroom soup isn't difficult to make, although you have to decide whether you want a quick version or a more-like-store-bought version, which uses evaporated milk.

Now, if you're up for a (simple) adventure, you'll want to make the evaporated milk, but a word to the wise – making homemade evaporated milk takes a while. (You can see the recipe and all the details here.)

If you want a much quicker version (like I do 99% of the time I make this), feel free to use canned evaporated milk OR simply substitute in one part cream to three parts milk when making the cream of mushroom soup. It's not perfect, but is still gorgeously yummy, so I find it a worthwhile substitution to save the time.

The crowning glory of green bean casserole is the fried onions. When I originally wrote this back in 2013, store-bought french-fried onions without hydrogenated oils and preservatives were few and far between. Now, they're much easier to find, so they're a decidedly decent option.

However, making homemade ones isn't difficult – they just take a bit of time. They're also delectable for snacking and super-inexpensive, so if you've got the time, I recommend making a double batch. 🙂 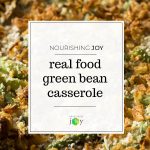