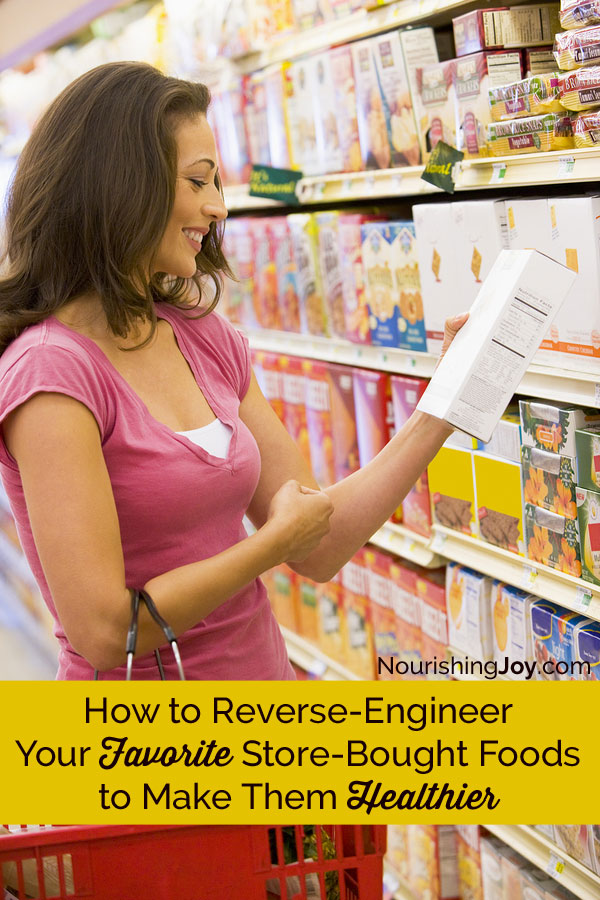 Have you ever had a craving for Stovetop Stuffing, but didn't want to eat it because you knew how processed it was?

Or perhaps you – like me – consider Green Bean Casserole (with the requisite Cream of Mushroom soup) as a staple on the Thanksgiving table, but don't want to serve those chemicals-in-a-can to your child?

Thus, today I want to show you the method I use to reverse engineer any boxed, canned, or packaged food and make it from scratch so that anytime you want to enjoy your favorite store-bought, packaged foods, you can easily make a healthy, additive-free version of your family favorite. (Hint: this is the method I've used to write both of my books of homemade pantry staples, The DIY Pantry and Restocking the Pantry.)

So often, we purchase boxed or canned foods not only because they’re convenient, but because we’ve gotten so used to recipes that use them. (Green bean casserole with cream of mushroom soup, anyone?)

The problem is – as it goes without saying – that boxed and canned foods are stuffed full of preservatives, artificial colors, artificial flavors, and stabilizers so that the product is sure to look and feel the same no matter the temperature or climate and to considerably extend the shelf life. But those same additives wreak havoc on our bodies and our ability to process the healthy food we do eat.

How to Reverse Engineer Your Favorite Boxed Foods

I’m a passionate advocate of homemade versions of store-bought foods. I didn’t set out to become that way, but since I’ve now written two cookbooks specifically by reverse engineering my family’s favorites in order to inspire others to eat more healthfully, it’s become a personal mission to reverse engineer everything I can get my hands on.

So, this is the method on which I rely:

2. Take note of the ingredients you don’t know (or that obviously come from a lab). For the most part, you can ignore anything you don’t recognize, but you do want to have a basic understanding of what different additives do.

Additives usually act as thickeners, sweeteners, emulsifiers, colorants, or anti-caking agents, for example. Likewise, most processed foods contain additives that are preservatives or flavor enhancers (such as MSG), and obviously, you can utterly ignore those two, but the others give you a hint at the final flavor and texture you want.

Helpful Hint: You can look up nearly any additive at the Center for Science in the Public Interest or in the International Food Additive Database (this one is maintained mostly for agencies and academic research, but anyone can register for free to use it).

3. Sketch out the base of your recipe. Based on the ingredient ratios and the final texture you want, write out a basic recipe.

For example, if you’re making crackers and the first ingredients on your favorite cracker box are wheat flour, water, and oil, you can fairly easily come up with a recipe that combines those ingredients into a recognizable dough. Ingredients are listed on a box or a can in descending order according to quantity, so this can give you some clues to the ratios you want.

And this is where lots of creativity can come in. For example, when I was developing the recipe for Cream of Mushroom Soup, I knew I wanted a thick, creamy soup that mimicked the condensed version of the canned version, but whipping cream was too rich and too thin, and adding cornstarch to milk or whipping cream just made it gloppy rather than spoonably thick. The answer I finally came up with was evaporated milk + cornstarch. So, be creative!

4. Adapt the recipe to ” real food” ingredients or to ingredients your family will eat. Even though anything you make in your kitchen will be healthier than the store-bought, packaged counterpart, it’s still best to avoid industrialized oils and refined flours and sweeteners, if possible. Substitute butter or coconut oil for canola or soybean oil, use honey or evaporated cane crystals instead of white sugar, and gravitate toward whole wheat or spelt flour. Granted, sometimes these won’t mimic the flavor you’re going for, so you have to decide what your priority is – and that’s okay!

5. Guess about the spices. Spices are very rarely, if ever, listed on a box. Usually it just says something like, “spice” or “natural flavoring.” So, this is where you get to make the recipe the way you like it. Like more Italian seasoning? Absolutely add it. Want less garlic? Change it for sure.

So there you have it. This is the method *I* use for developing from-scratch recipes that look and taste like their store-bought counterparts.

But now I'm curious to know how YOU do it. What's your method? What recipe have you converted that you're especially proud of?