How to Cook a Completely Frozen Turkey 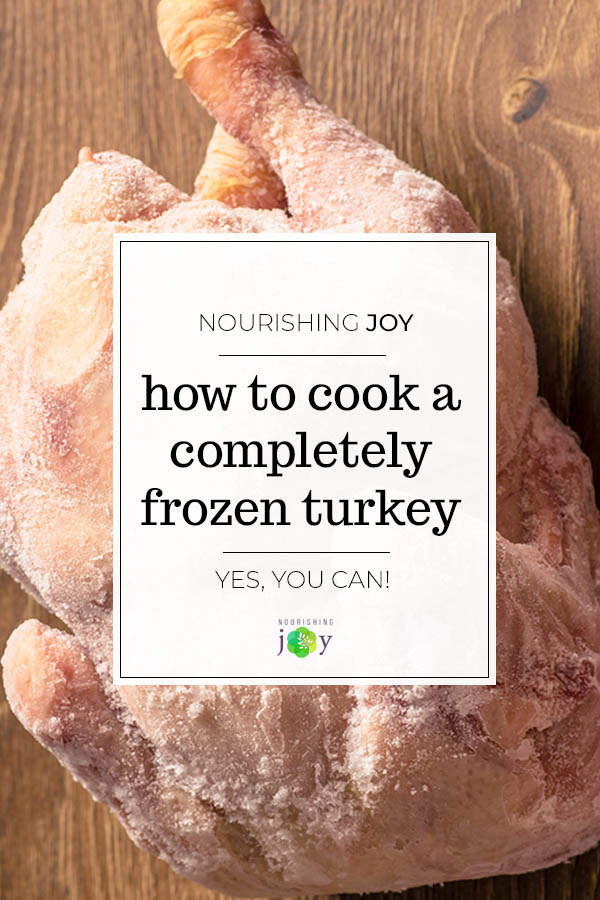 It's Thanksgiving morning and – either purposely or accidentally – you've got a frozen turkey on your hands.

And you want to serve your feast in just a few hours, preferably WITH the main course safely and deliciously at the center of the table.

First of all, let me assure you there is ZERO reason to panic – at least half of the time, I cook my turkey and chickens straight from the freezer and in some ways, I actually prefer to cook them that way. You can't do any fancy brines or spice rubs and the giblets are still stuck inside (if they were originally packed that way), but the meat tends to stay quite juicy and the skin browns gorgeously (perfect for those of us who like crispy, crunchy skin).

So, since you've got a dinner to make, let's speed through this…

How to Cook a Frozen Turkey

First of all, this is as simple as it gets – it's even easier than our usual foolproof method: simply toss your turkey into a roasting pan (preferably on a rack inside the roasting pan, but hey, at this point we won't be picky), then bake at 325°F until it's fully cooked – anywhere from 4-8 hours. (See the cook times chart below.) Just remember – it takes at least 50% longer to cook a frozen turkey than a thawed bird, so allow for extra time.

(For a partially thawed turkey, the cook time will simply be somewhere in between.)

🦃 Cook Times for a Frozen Turkey 🦃

There are a few things you'll want to remember, however:

Is it safe to cook a frozen turkey???

Yes, indeedy. It's even USDA-approved.

In order to be safe, no part of the bird can be within the “danger zone” – that is, between 40°F and 140°F – for more than two hours. As long as your oven stays above 325°F through the cook time, your meat will go quickly through this zone and remain safe.

But what to do with all the other dishes that need the oven?

One of the downsides of cooking a frozen turkey is that it takes up precious oven space for even longer. So what to do with all the side dishes that need to go in too?

Thankfully, many dishes can be relegated to other cooking methods and turn out delectably. For example, try moving the stuffing into the slow cooker and make the mashed potatoes in the Instant Pot. They both work wonders. 🙂

Happy Thanksgiving to you and yours! May your day be enormously peaceful and may your home be nourished by joy.