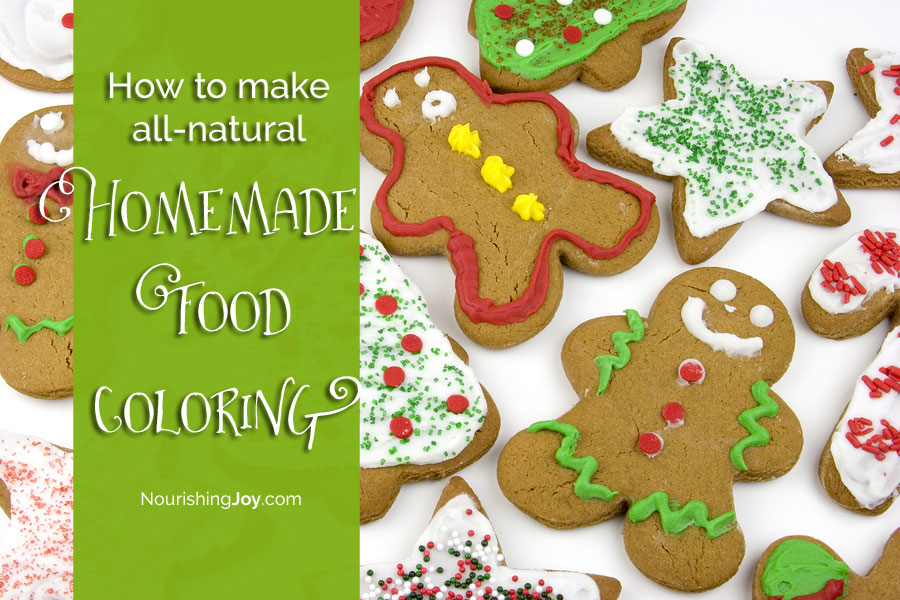 However, the first post I put up on the subject was Naturally Dyed Easter Eggs, which is a very helpful post if you're making Easter eggs, but as time has gone on, I've realized the post hasn't been all that helpful for other food-related uses, such as buttercream and play dough.

So, I've decided it's high-time to give homemade natural food dyes their rightful place in a post all their own.

Especially since conventional food dyes are petroleum based and are linked to such things as hyperactivity in children, increased food sensitivities, and even rashes and eczema, it's more and more important to know how to make your own homemade food coloring. (I wrote a whoooooole lot about that in my post about The Fake Food You Don't Know You're Eating.) Who wants to deal with that? Natural is definitely the way to go on this one!

So, without further ado, I give you homemade, natural food coloring!

1. Natural colorants often lend a more demure hue than their petroleum-laden cousins. This is merely due to ratios : a concentrated store-bought food coloring requires only a few drops to add color and thus doesn't change the texture of the food by adding vast amounts of liquid. By comparison, it's difficult to get a true “red” from beet juice rather than just pink, not because the beet juice isn't red enough, but because most recipes can't stand up to the amount of liquid required to obtain a true red.

HOWEVER, you CAN make concentrated natural food dyes. See below to learn how.

On the other hand, just a few drops of beet juice will create an absolutely lovely pink in frostings and ice creams without adding even a hint of beet flavor. (See the list below for a number of gorgeous examples….)

2. Since these colorants are foods themselves, remember that strongly colored foods also tend to be strongly flavored foods, so try – as much as possible – to avoid using large quantities of any of these (a small amount of cinnamon, for example, might make a frosting heavenly, but a large amount would render it inedible).

Also keep your final flavor in mind so that the colorants don't overwhelm it. I'm assuming you don't necessarily want paprika spiked buttercream or parsley ice cream! Again, small amounts of those colorants won't even be noticeable, but large amounts most certainly will.

3. Vegetable powders are great ways to add vivid colors without adding excess liquid, so if you're wanting a deep red, for example, use beet powder rather than beet juice. Another alternative is to reduce your liquid to a concentrated syrup, so see even farther below for a two quick tutorials on how to make vegetable powders and how to make concentrated homemade food coloring, just like you'd buy in a store.

4. Vegetables-based dyes can turn brown when baked, when otherwise put in an alkaline environment, or when sufficiently oxidized. Thus, vegetable dyes WILL NOT WORK when baked unless the batter or dough includes sufficient acid medium, such as buttermilk, lemon juice, or vinegar. I highly recommend stirring lemon juice into your vegetable juice (e.g. parsley juice, carrot juice, or beet juice) in at least a 1:6 ratio if making a rainbow cake or red velvet cupcakes.

You can also help keep the dyes at their vibrant-y best by cooking the vegetables ahead and blending them into a purée rather than using the raw juice. 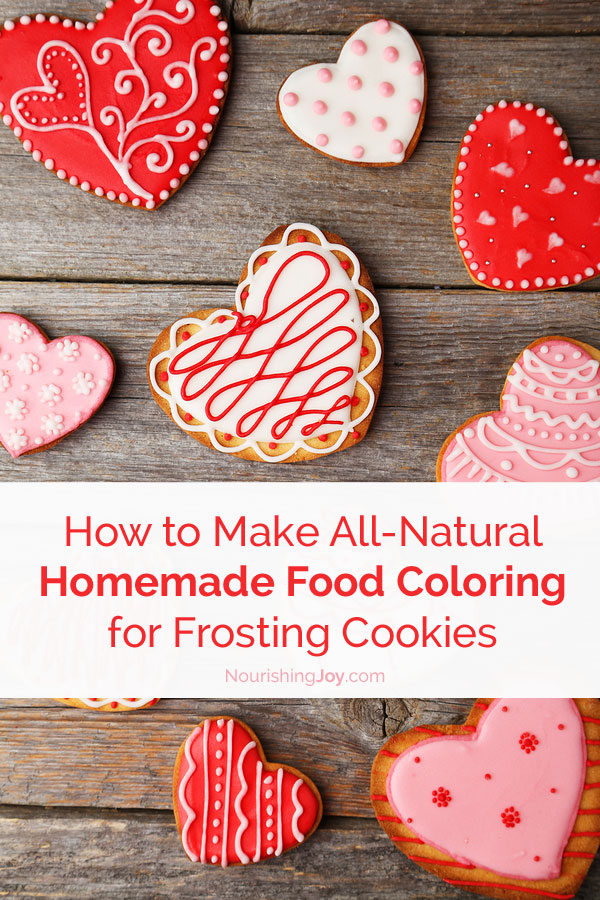 Start with a small pinch or a few drops of these colorants and add more according to your desired shade.

(FYI: Blues and purples are notorious for being the most difficult dyes to produce, either naturally or in a lab, so it can be tricky to get the right hue. Blue butterfly pea flowers, interestingly enough, are by far the most reliable way to get a beautiful blue or violet. Purple sweet potatoes lend a lovely deeper purple.) 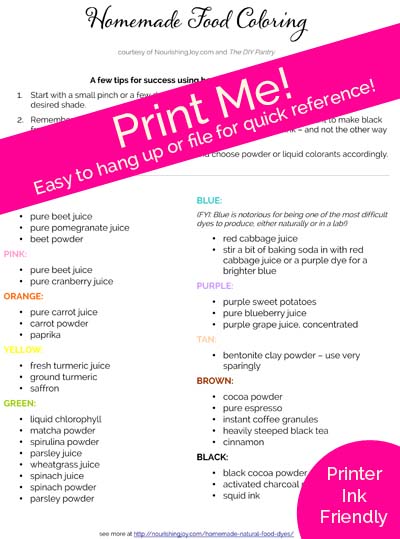 And one example of one recipe that totally FAILED with natural food dyes: Homemade Crayons 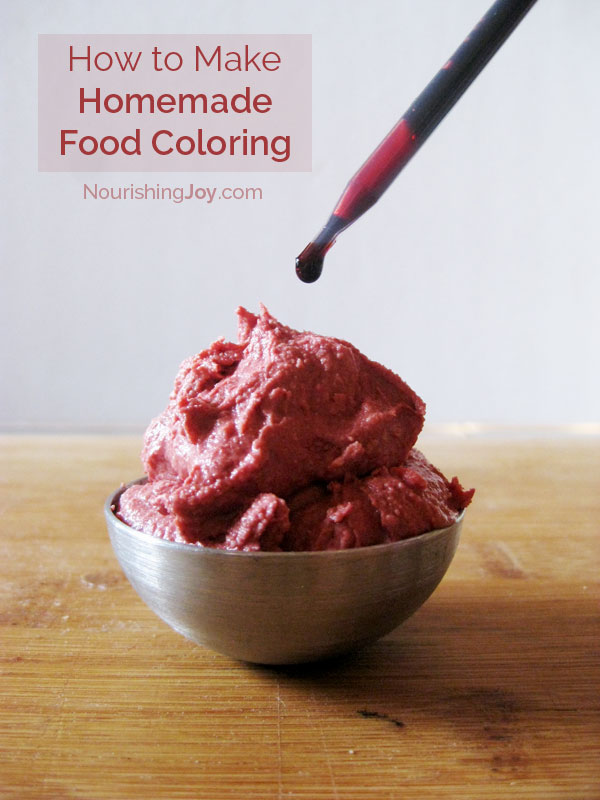 This is more common sense than secret, but it still took me several years of tinkering to realize what makes a great natural food coloring – and that is:

The best homemade food colorings are intense in both color AND opacity.

Again, this may seem oversimplified, but consider this: if you take pure pomegranate juice and look at it, it looks rather intense, doesn't it? It's a deep red! But then pour some in a clear glass and hold it up to the light. Even though it's bright and intense, it's also translucent. You can sort of see through it. Now do the same thing with freshly juiced beet juice. It's intense too, but when you hold it up to the light, it's absolutely dark. You can't see through it at all.

THAT's the mark of a good food dye. And if even those intense dyes aren't intense enough – say, you're wanting to make a fire-engine cake or Cookie Monster cupcakes for your child's birthday – then that's when you need to concentrate that dye even further so you can use A LOT of it without changing the texture or the flavor of the frosting.

Thus, the most successful natural food colorings are:

How to Make Vegetable Powders for Homemade Food Coloring

To make any herb or vegetable powder called for here, slice the desired vegetable paper thin (or merely place whole herbs or berries on a tray) and dehydrate in a food dehydrator or oven set at about 150° until fully, absolutely, completely dry (2-6 hours, depending on the vegetable).

Place dried vegetable/fruit chips or herbs in a coffee grinder or blender and grind until you have a fine powder.

Store in an airtight container for up to 1 year.

Another option for making a more concentrated dye is to reduce a deeply colored liquid, such as beet juice or the juice from purple sweet potatoes, into a syrup. This will allow you to make more vivid colors without affecting the flavor or texture quite as much.

To make a concentrate, place about 1 cup of freshly squeezed juice over very low heat. The only way I've been able to do this successfully is with a mini-crockpot. I use this one.

Leave the lid off the pot so the liquid can evaporate and heat until the juice begins to thicken and drips slowly off a spoon rather than running off easily, about 24 hours, give or take 8 hours depending on your climate and pot. The liquid will be less than 1/4 of its original volume.

Use this concentrated liquid as your colorant directly OR mix it with a bit of glycerin in a 2:1 ratio (colorant:glycerin) and store in the refrigerator for 2-4 weeks. 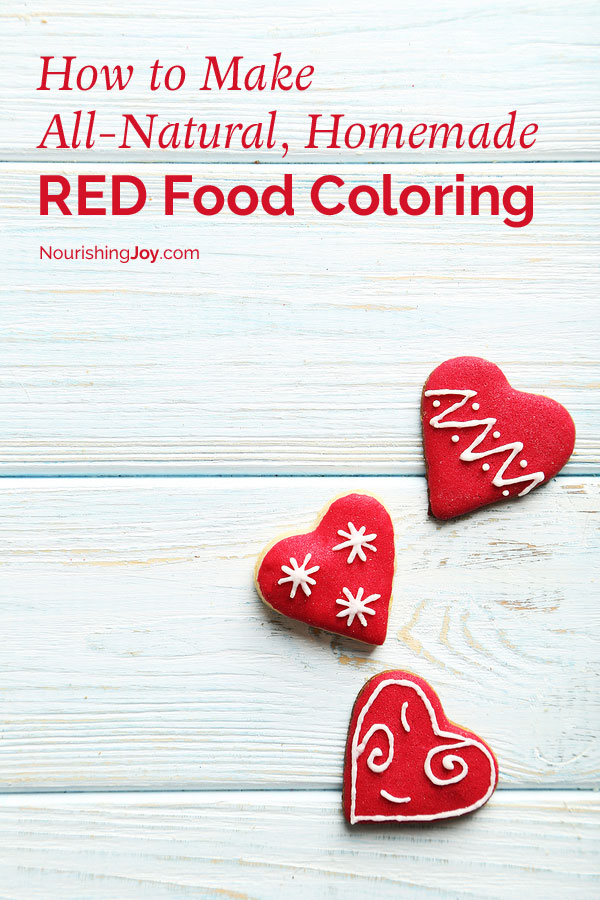 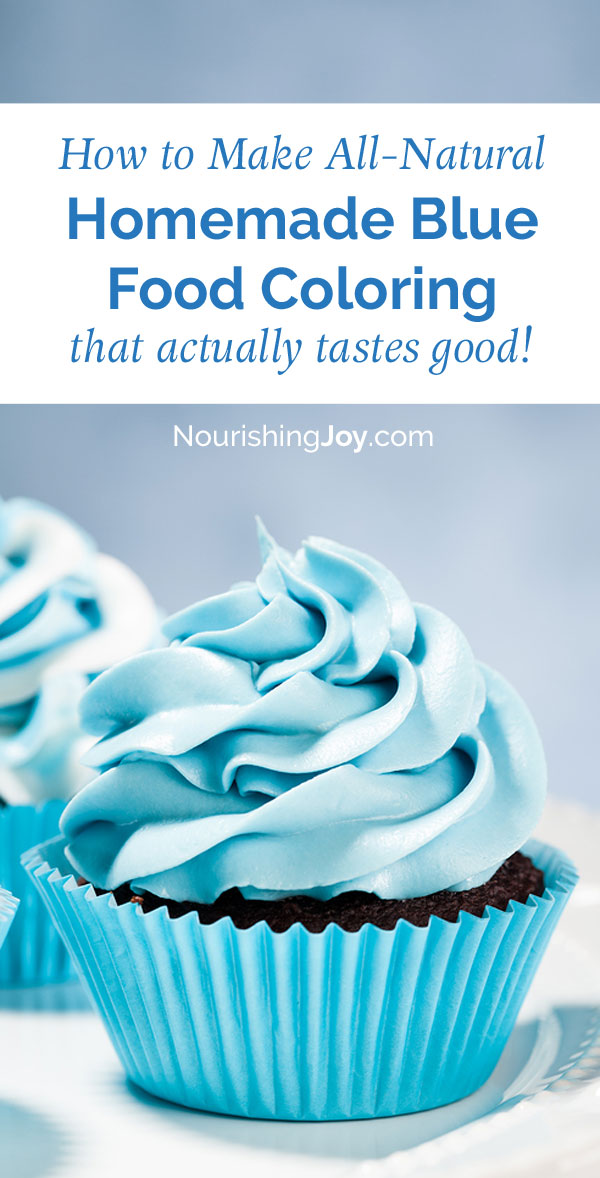 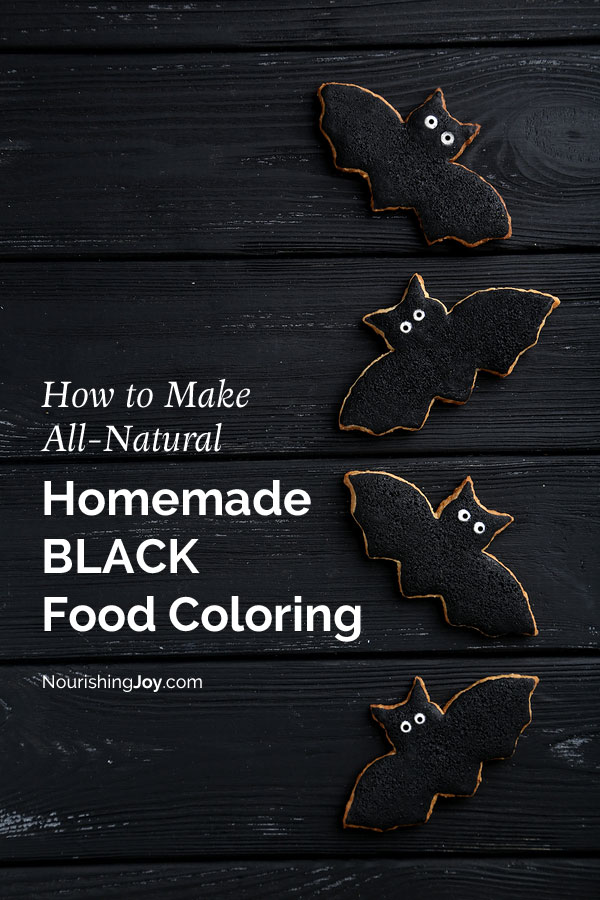 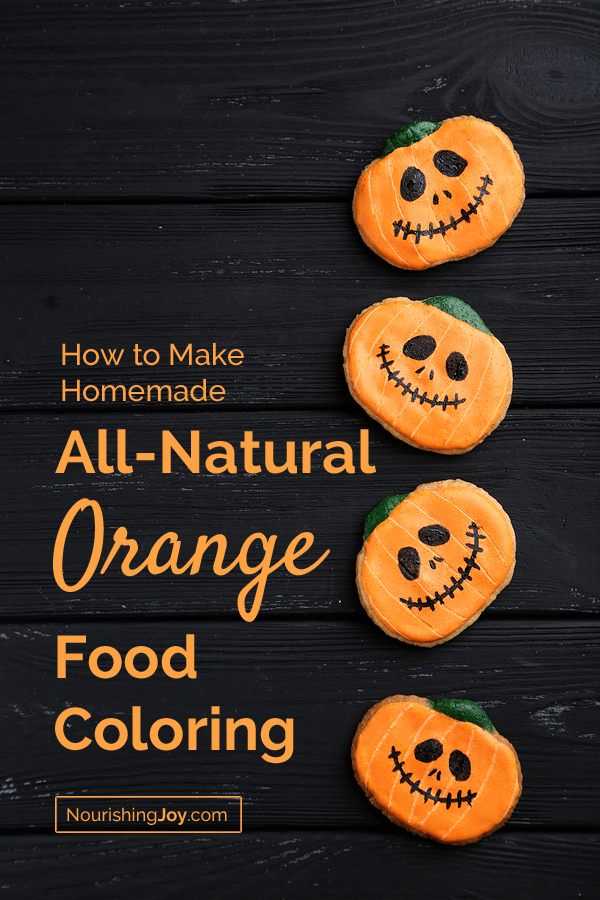 In the comments, several people have wondered about using these natural food dyes for dyeing fabric. I am woefully ignorant in this regard, but I just ran across a post that might be helpful: Condo Blues: How to Dye a Shirt Minion Yellow with Turmeric.

This woman dyed a white t-shirt bright yellow using ground tumeric and gives detailed instructions and notes. So, perhaps the same process would work with beet juice or other natural dyes? I don't know – has anyone else tried it? Does the dye stay once it's been set?

Update: Here's one comment from the discussion thread below that I thought helpful enough to add here:

“I can speak to dyeing fiber. It’s a different process that needs different recipes. Some are colorfast and some are not. Turmeric is a very easy dye and makes a very bright deep yellow, but is NOT colorfast at all. It will fade or wash out quickly. Beet doesn’t adhere well and is far more likely to make tan than pink. There’s a different recipe for each dyestuff, so one should search for specific dyestuff. Fruit and berry juices tend to be quite weak and don’t last long. Don’t use heat with them for the best result. Some of the best food fiber dyes are avocado pits and peels (red), carrot *tops* (yellow), onion skins (yellow & green), black beans (blue), tea, coffee.” 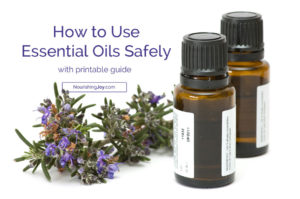