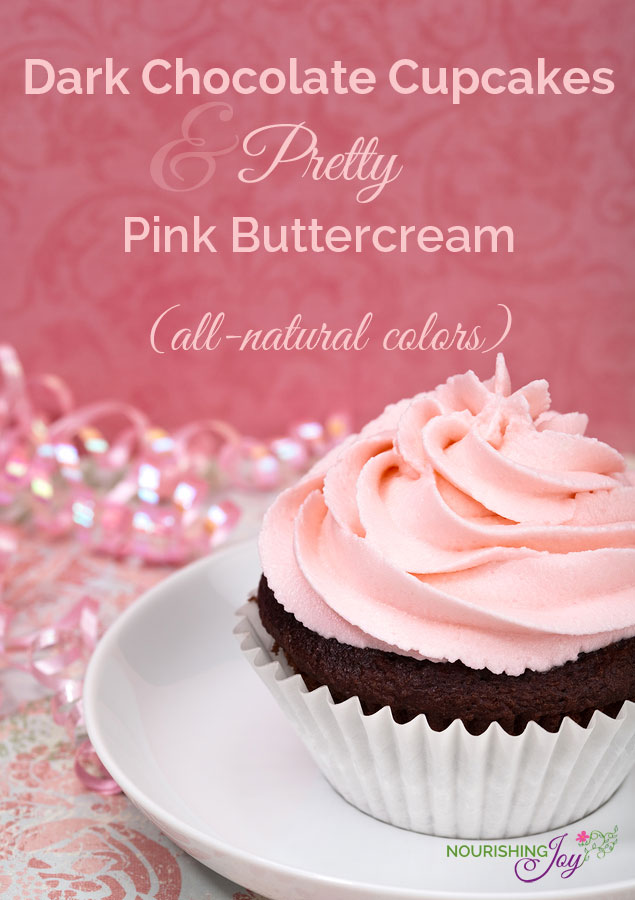 For my daughter's recent birthday party, she asked for chocolate cupcakes with pretty pink frosting.

(Rather a propos for a six-year-old, I thought.)

Thus, I went to our usual sourdough chocolate cake recipe, tweaked it a bit, and turned it into cupcakes.

Now, you may notice that this is a fairly similar recipe to our Sourdough Black Forest Cake. However, the reason I didn't just bake that batter in cupcake form is that the Black Forest recipe is purposely made as quite a dry cake, as it needs to absorb a scrumptious soaking syrup and balance the large amount of whipped cream.

Here, the cupcakes are far more naked, having only a bit of buttercream to balance the texture. Thus, note that this recipe adds in an egg yolk, extra coconut oil, and calls for mixing the cake as little as possible. These are all to help keep the cupcakes as moist and tender as possible.

For the frosting, naturally I decided to make buttercream, as I have a not-so-demure, absolute, swooning love-affair with true European buttercream. It's an easy-but-often-panic-inducing frosting to make, as there's one stage where the frosting nearly always looks ruined and the ability to save it looks bleak. (I must confess to Googling “what to do with buttercream soup” on more than one occasion.)

It's easy to fix, however, and I've included troubleshooting tips at the end.

When I was making the buttercream for my daughter's party, I was torn between raspberry and rhubarb for flavoring and I wanted to try using beets for the coloring. The results were good across the board: both raspberry and rhubarb worked well as flavorings and the beet juice worked surprisingly well without making the buttercream taste of beets at all and gave it a beautiful pink hue.

(Note: Due to the fact that evaporated cane sugar still has all its minerals, the sugar is not white. Therefore, your base meringue will not be white. However, with the addition of the beet juice, you can't tell the difference, so the evaporated cane juice works just fine in this application.)

As a side note, as I was verifying my ingredients, I realized these cupcakes could be called the “poster child” of fair trade foods. Coffee, chocolate, and sugar are all among the crops that are most subject to social and economic violations of human rights abuses, which are minimized when distributed via fair trade sustainability standards and Fair Trade certification. Coconut oil is also available under the Fair Trade label, so choose fair trade brands if they're available at a reasonable cost near you.

Also, I should mention that I do not consider frosting to be healthy. Not in the slightest. It has waaaay too much sugar. However, for birthdays and other special occasions, by using more nourishing versions of the other ingredients, it can at least be considered healthier.

And as a last note, if you want a faster method for making buttercream that doesn't involve heating anything on the stove, check out my new book, The DIY Pantry, for a killer chocolate frosting that can be whipped up in minutes.

For the cupcakes:
In a large mixing bowl, combine the sourdough starter, the milk, and the flour. Cover and allow to sit at room temperature for 8-24 hours.

Preheat the oven to 350 degrees Fahrenheit. Line muffin tins with parchment muffin papers and set aside.

Scrape the sourdough mixture into the bowl of an electric mixer (or grab your favorite wooden spoon to mix by hand). Add the cane sugar, coconut oil, and vanilla and mix on low speed. Increase the speed to medium-low and add the eggs one at a time.

Reduce speed to low and add sea salt, baking soda, cocoa powder, ground coffee, and melted unsweetened chocolate. Mix just until homogeneous, but no more, scraping the sides of the bowl if needed. If the mixture is very thick, add a few tablespoons of milk to thin it. Stir in the cocoa nibs by hand.

Spoon the batter into the prepared paper cups and bake for 15-20 minutes or just until a wooden skewer inserted in the middle comes out clean. Cool for at least 10 minutes in the pan before inverting onto a cooling rack.

For the buttercream:
Start by making sure the mixing bowl of your electric mixer is completely clean and completely dry.

Next, prepare your juices: for raspberry juice, place 1 cup of raspberries in a blender, food processor, or mortar. Puree the berries and pour into a cheesecloth, then let the berry juice drip out until you've got 1/2 cup juice. For rhubarb juice, either follow the same method as the raspberries, allowing much more time for the juice to drip to obtain sufficient juice, or run the rhubarb stalks through a juicer. For beet juice, coarsely dice 1 small beet, then run it through a juicer. Set juices aside.

Bring 1 inch of water to a steady simmer (not boiling) in a wide, shallow saucepan, then place the sugar and egg whites into the bowl and place over the simmering water. Whisk gently until temperature reaches 140 degrees F, or if you don’t have a candy thermometer, until the liquid is hot and you can't feel any granules when you rub a drop between your fingers.

Remove the bowl from the water and place the bowl back on the electric mixer fitted with the whisk attachment and whip on medium-high speed until the mixture is white, glossy, and and about doubled in volume. The temperature of the outside of the bowl at this point should be neither warm nor cool.

Add the butter one cube at a time until incorporated, and whip until it has reached a thick, silky smooth texture. (This is the point of panic, so don't be alarmed. If the mixture deflates or curdles, just place it in the refrigerator for 10-15 minutes, then keep whipping and whipping and whipping – it will become thick and smooth again, even though it might take several minutes.)

Toss in the salt, then drizzle in the juices.

It is highly likely that as you begin to add the butter, the whole thing will deflate, become liquid, or even curdle. This has everything to do with the temperature of the butter and nothing to do with your skills as a baker. (Whew!) It's merely due to the butter being too soft, but it's totally fixable  – just pop the mixing bowl in the refrigerator for 10-15 minutes, add a couple of extra tablespoons of butter, and whip it and whip it and whip it until it comes together.

For future buttercream adventures, here are a few attempts to describe the perfect butter-state: the butter should be soft enough that if you squeeze it lightly, you can feel it squish very slightly under your fingers – it shouldn't feel like it just came out of the refrigerator and you'd have to push hard to dent it at all. Yet it should actually be quite firm – if you were to spread it on toast, you'd likely be frustrated because at this temperature, it wouldn't spread easily. When you slice it, it should slice easily, yet also keep its shape.