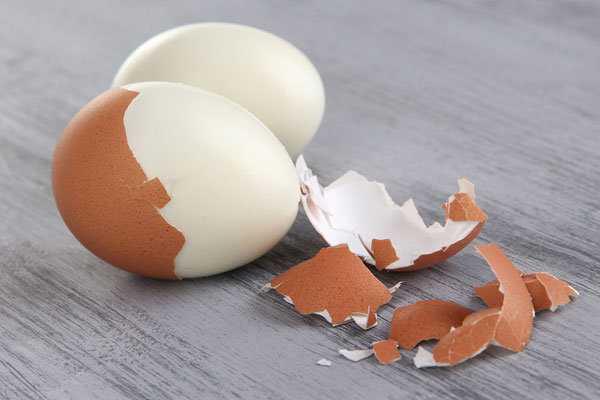 For years I have taught the widely accepted method for how to make hard boiled eggs – namely, boiling them – but a few weeks ago when I ended up with a large batch of super-difficult-to-peel eggs, I felt that I had met my nemesis. Thus, I looked to a few of my colleagues for insight and happily enjoyed this article. (Read it – it's fascinating.)

So I changed my method and sho ‘nuf, my next batch turned out nearly perfectly, as did subsequent batches using our fresh backyard eggs (after they had been allowed to sit for a couple of weeks – I haven't tried it yet with super fresh eggs).

So today, I'm sharing what seems to me the biggest kept secret in the home cook's world – how to perfectly cook a hard-boiled egg so that it's easy to peel.

And the secret is… steam.

Steaming the eggs exposes the eggs to a temperature even hotter than putting them in boiling water – but more importantly, shocks them, which helps the albumin release from the shell.

For example, when you hard-boil eggs by boiling them, you start by placing the eggs in cold water, which you then slowly heat and bring to a boil.

When you steam eggs, however, the heat hits the shell at full force – similar to searing, I suppose – which helps the white separate easily from the membrane inside the shell.

However, despite the elevated heat, it also cooks more evenly, so you more easily end up with a perfectly cooked egg: namely, that you have a fully-cooked yolk that hasn't begun to turn green from over-cooking (that green is sulfur, by the way, which is the first sign of overcooking), as well as having whites that haven't yet turned rubbery.

Of course, you CAN still overcook them if you leave them for several minutes too long, but steaming does provide more flexibility to catch them in that “perfectly cooked” stage.

This method also allows you to cook a whole whack of eggs at one time. The steamer insert in my standard-size stock pot easily holds 5-6 dozen eggs, and you can cook as few or as many eggs you want at a time, provided the lid sits properly on the pot.

So this is especially handy when you need to bring deviled eggs to a party, you want to make a big batch of egg salad, or at Easter when you want to have a serious egg dyeing party (using natural homemade food coloring, of course!). Just steam several dozen all at once!

How to Perfectly Hard-Boil an Egg

To use the steam method for making hard-boiled eggs, bring 1-2 inches of water to a rolling boil in a stock pot. Place cold eggs in a steamer basket, then lower it into the pot, ensuring none of the eggs are submersed in water, and set on the lid.

Immediately place in an ice bath to halt cooking, then when cool, either peel or store in the refrigerator.

Peel under cold, running water for an even easier release and efficient peeling.

And of course – enjoy!

Update April 2019: I've recently started cooking my eggs in the Instant Pot, even our farm fresh ones straight from our chickens. It has made the task EVEN EASIER. 🙂 I'll follow up with a tutorial shortly, but if you're reading this before I update, this tutorial is similar to the method I use. 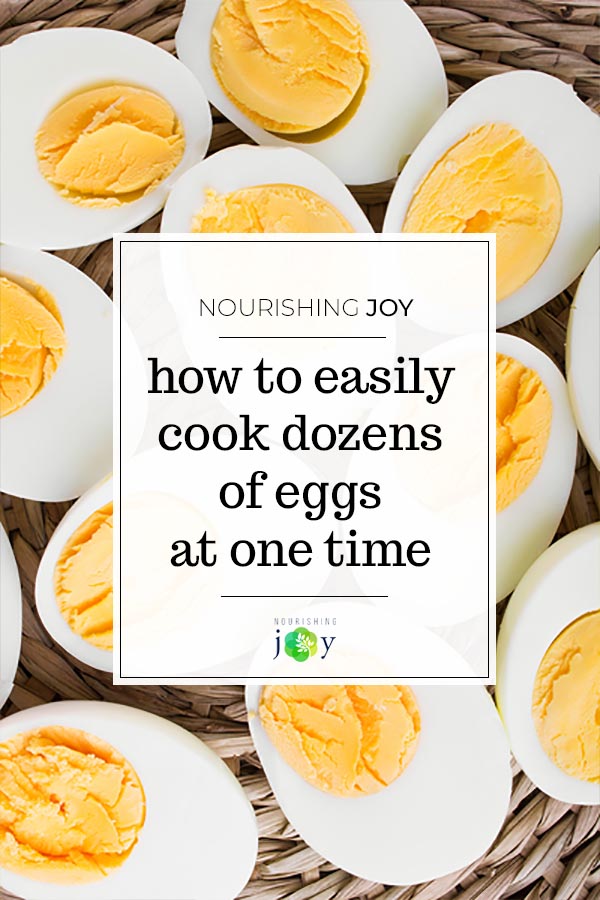