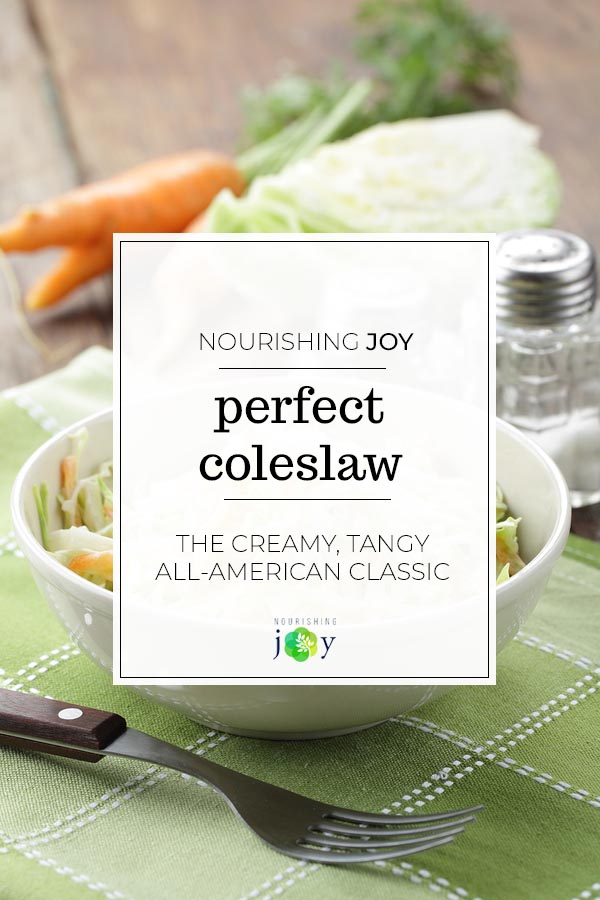 A couple of years ago I posted our family's favorite slow cooker pulled pork recipe, and it went wild. Who knew people love pulled pork so much?!?

Anyway, earlier this spring someone asked in the comments of that post if I had a good coleslaw recipe to go with it. The answer is – YES! – but it's taken me until barbecue season is upon us and Canada Day/4th of July festivities are just around the corner to actually post the recipe up. Mea culpa.

I can't take a whole lot of credit for this recipe, as this recipe – or at least ones very much like it – have been part of the American culinary landscape for more than 200 years – 1770 was the earliest date I was able to trace.

Interestingly enough, even though coleslaw is most often connotated with Southern food nowadays, it was originally made and popularized by Dutch immigrants in New Amsterdam in the mid-to-late-1700's. Actually, that's not surprising, considering much Dutch food involves cabbage! 🙂

(Side note: There are roots of a raw-cabbage-and-vinegar salad as far back as ancient Greece and Rome, which Pythagoras and others attributed to their longevity, but since mayonnaise and other egg-and-oil emulsions didn't really appear until the mid 18th-century, this version is decidedly more modern.)

And in more recent times, this style of coleslaw is what has been popularized by fast food restaurants such as KFC. But I assure you – this fresh, perfectly-dressed version is 100 times more tasty than that soggy, trans-fat-laden variety.

So, with a nod to pulled pork and a long, languid summer ahead of us, here is a recipe for simple, perfect coleslaw.

P.S. If you're looking for other delicious coleslaw variations, this article at NPR.org has a few GREAT suggestions!