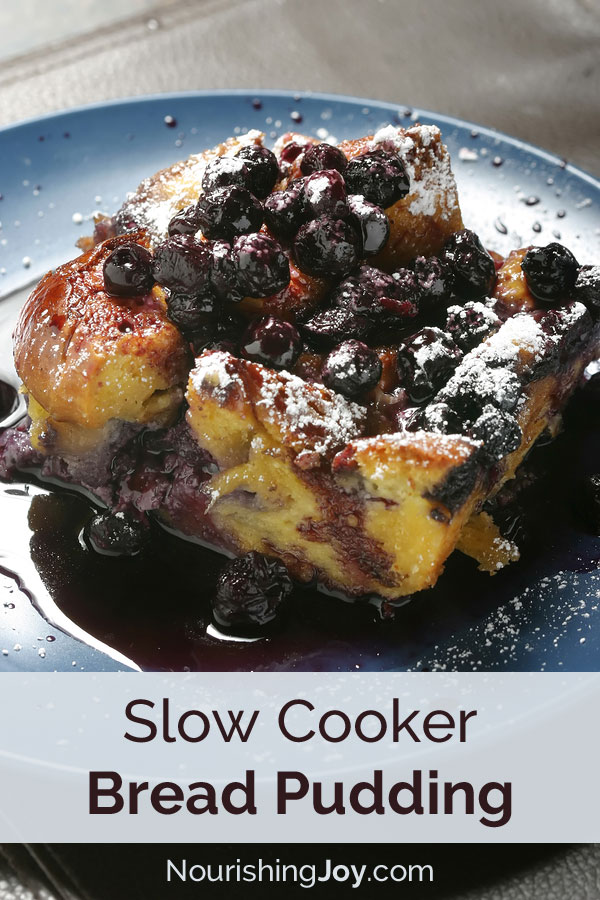 Sunday morning is always a bit harried, trying to get out the door to church with three little ones in tow. And since it's Sunday – a day we like to set aside for rest, worship, and family time – I like breakfast to be something a little special.

Trouble is – on a day of rest when we're trying to get out the door in a hurry, “special” isn't exactly something I want to spend a lot of time on.

So when I discovered that I could make bread pudding in the slow cooker, I was ecstatic! I've been making this every Sunday for several months now and every week it's something we all look forward to. I prep it Saturday night and we have a hot breakfast waiting for us in the morning.

I haven't tried it with any gluten-free breads, but I would imagine it would work just fine as long as there's plenty of bread so that it doesn't get completely saturated and get overly soggy.

I've also discovered that it works well for savory bread puddings too. Thanksgiving stuffing has been a breeze and our favorite spicy ham and cheese strata comes out beautifully.

Oh, and one frugal tip – make this with leftover bread pieces saved through the week. Since our homemade bread comes out with very crunchy, chewy crusts (which my husband and I love), we typically trim them off for our younger children because they're just too difficult to chew. Through the week I save the crusts and make this bread pudding with all those reserved bread pieces. Any stale pieces you have – croissants, challah, sourdough, whole wheat, whatever! – will work beautifully.

serves 6-10, depending on serving size

In a large bowl, whisk the eggs, then stir in the milk, vanilla, cinnamon, sugar, and rum. Mix well.

Add the bread cubes, pressing them into the egg-milk mixture, and let sit for 15-20 minutes.

After the bread cubes have soaked, pour the entire mixture into the slow cooker insert.

Cook on low for 4-8 hours. (It's typically done after four, but longer won't hurt it.) 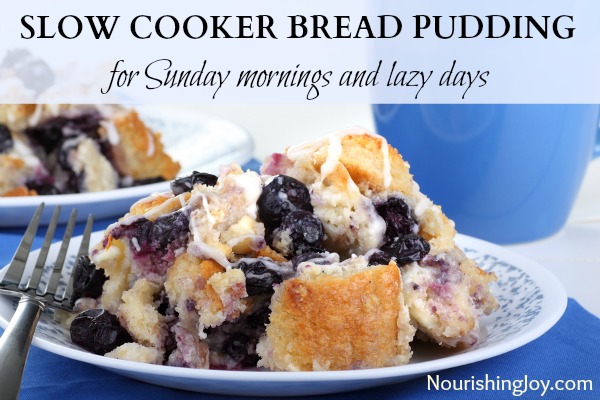 Just before pouring the bread cubes into the slow cooker, add in 2-3 handfuls of dried fruit.

While whisking the eggs, mash in 3 very ripe bananas. Add the milk, cinnamon, vanilla, sugar, and rum as normal, adding an extra tablespoon of either vanilla or rum.

Just before pouring into the slow cooker, add in 30 grams (1 oz) of cocoa nibs or broken pieces of milk chocolate.

Just before pouring into the slow cooker, add 1-2 cups fresh or frozen blueberries and 6-8 oz of cream cheese, cut into 1-inch cubes.

Make the bread pudding as directed, adding in an extra 1/2 cup maple syrup and reducing the milk by 1 cup.

Just before pouring into the slow cooker, add 1 cup fresh or frozen cranberries and the zest AND juice from 2 large oranges.

While whisking the eggs, add in 3/4 teaspoon ground cardamom and 1 tablespoon cinnamon. Replace milk with coconut milk (if using cans, two standard 14-oz cans are sufficient even though it won't equal 4 cups).

Just before pouring into the slow cooker, add in 2 tablespoons of candied ginger.

If I'm needing protein in the morning, sometimes I'll add a hearty sprinkle of pistachios to this bread pudding once I've served it up.

This bread pudding is based on the breakfast bread pudding recipe in our FREE “Whole Food Family Favorites” e-cookbook that you get when you sign up for our updates. (Get your free copy now!)

While whisking the eggs, whisk in 3/4 cup almond butter, 2 teaspoons cinnamon, a dash of nutmeg, and a dash of cloves.

Prepare as directed above.

While whisking the eggs, add in 3 tablespoons of your favorite dried herbs, such as parsley, sage, rosemary, or thyme.

Just before pouring into the slow cooker, add 1 cup finely diced celery, 1 large, finely diced onion, and 1 tablespoon dried sage. You may add chopped giblets if you so desire.

In a large sauté pan, sauté 1 pound of your favorite mushrooms and wilt 1 large bunch of spinach.

Just before pouring the soaked bread cube mixture into the crock pot, stir in the mushrooms, spinach, and 1/2 cup of Parmesan cheese.

Chop uncooked bacon into 1-inch pieces and sauté until crisp in a large pan. Remove with a slotted spoon and sauté 2 leeks in the remaining bacon grease, using both the white and green parts.

Just before pouring into the slow cooker, stir in the bacon and leeks.

Brown 1 pound of Italian sausage and cook it well.

Just before pouring into the slow cooker, add in the cooked sausage, plus 2 tablespoons dried oregano and 4 cloves of garlic, minced. Optionally, you may add 3-4 tablespoons chopped sun-dried tomatoes as well.

What's your favorite bread pudding? Do you have any ideas to share?