The Truth About This Election Season (and about life in general) 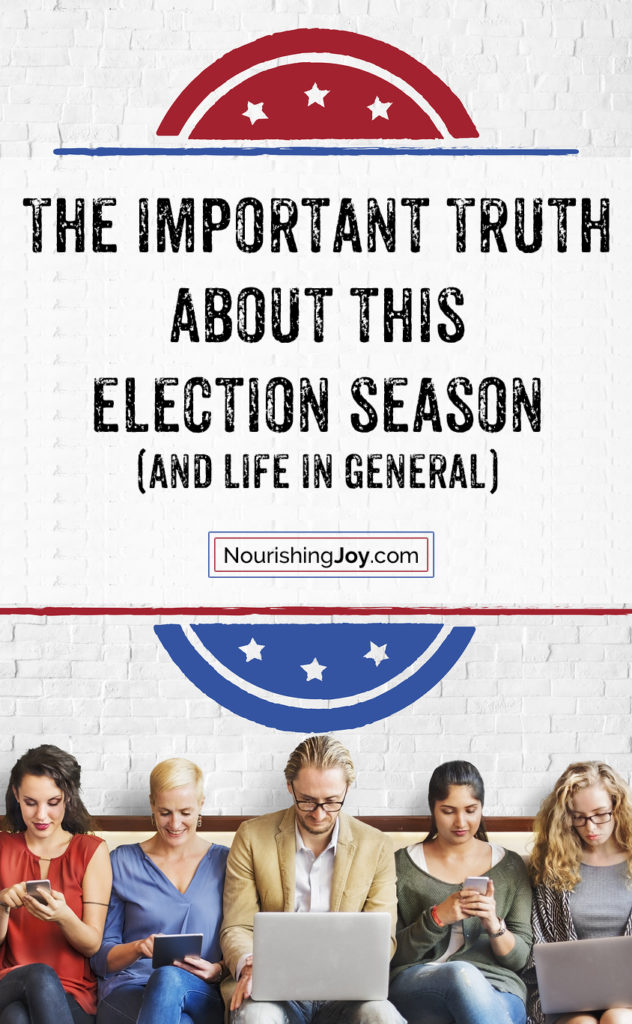 My husband and I have been married for more than a decade and one of the adages we have lived by religiously since the days when we were dating is this:

Arguments and disagreements may come and go, but what will remain long after an issue is resolved is the emotional residue of how we treated each other while we argued. It's easy to erode trust in the midst of a heated discussion (or in the midst of a volley of passive aggressive zingers), but it's difficult to rebuild that trust when the issue at hand has come and gone.

Tomorrow is Election Day here in the United States, and while elections happen every year, this year the election season has risen to an emotional boiling point and common sentiment is that we just all want it to be over.

In the midst of this, I can't help but think of the adage my husband and I have applied to our marriage, and today I want to proclaim it to the nation.

The truth is that no matter your political leanings, when this election is over, we still have to live with one another — no matter how different we may be.

Maybe you're a Trump supporter, or maybe your vote has already been cast for Clinton. Or maybe you desperately want to support one of the independent or third-parties. But when all is said and done at the end of the day tomorrow, our country will still be made up of the same people it is today. And that's a beautiful thing.

Because to think that the success of any particular candidate – or even just the election being over – will somehow evaporate the distrust, hostility, and sense of moral superiority that has become accentuated in the last few months is vastly short-sighted. That residue will remain.

But the truth is – no election will solve that problem. No election CAN solve that problem. The onus of how to live and interact with people who hold vastly different beliefs than our own is on US – not the candidates or political parties – and lies in how we choose to treat others and how we teach our children, who will be the next generation of leaders.

I don't know about you, but most of the time I don't care if I agree with someone as we discuss an issue, but I very MUCH care whether I felt heard or not through the conversation and whether or not the other person came away feeling respected and heard by me. While this may not apply as directly to international diplomatic relations, it very much applies to our families, our communities, and most certainly our online interactions, which affect both policy and relationships across the globe.

With each passing day, we the people will continue to disagree on a great many issues, some of which will be very important. That is OK – beautiful, in fact, I daresay, because in pushing each other to think and engage, ultimately we have the opportunity to think more deeply about our own deeply held beliefs and cultural mores.

However, the point is – whether we're talking about local issues in our town with a population of 75 or whether we're talking about international issues affecting the nearly 580 million people in all of North America, there will NEVER come a day when we will all agree on everything. Period. There will still be issues that divide us in big ways — issues like the role of government, trade, immigration, the environment, culture, religion, education, the economy, the military, even HOW to discuss the issues, and so much more.

And that is OK. These are complex, weighty issues without simple solutions.

But in the midst of it all, let's rise to the best of what we're capable of and do what is difficult — namely, let's see each other as human beings and treat each other accordingly.

I would even take it so far as to encourage you to do this even when you're ranting to your friends or your spouse in private – check your words and your attitude to see if you're giving the object of your spewing basic credit for being human, created in the same image of the same God as you yourself. (Don't get me wrong – rants can be wonderful things and should be made use of liberally. Just make sure your words and attitude don't give a foothold to start thinking of that person as any less than yourself. Which is difficult when you consider their actions asinine at best.)

So… Clinton supporter, Trump supporter, Christian, Jew, Muslim, Democrat, Republican, Independent, or otherwise — we all have been put here with a purpose and we must all share this earth for as long as we are given life. So let's make it holy, worthwhile, enjoyable, and purpose-filled – for ourselves and for our global community.

And by the way, if you are a U.S. citizen, don't forget that you have both the privilege and the responsibility to vote on Tuesday. Make your voice heard!