Should You Spoon Feed Your Baby? 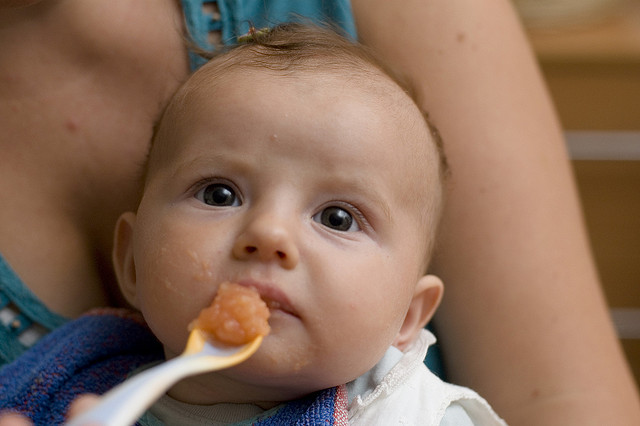 Spoon feeding is a hotly contentious issue in the real food world.

Baby Led Weaning emphasizes that babies should be offered a wide range of foods that they themselves can choose to put in their mouths. This will allow them to eat as much or as little as they would like according to their own sense of satiety, allow them to eat what their bodies are craving rather than what the parent dictates, and allows them to practice both gross and fine motor skills.

I am definitely sympathetic to Baby Led Weaning and by and large, we follow BLW practices with our little ones. However, I certainly call into question the issue of spoon feeding.

The thinking is that spoonfeeding is a way of foisting foods on our babies that they may or may not need and divorces us from knowing how much is too much.

In her book, Nourished Baby, Heather the Mommypotamus quotes the original book on the subject, Baby-Led Weaning

“Many [parents] worry that their baby or child isn’t eating enough. Food is intrinsically linked with nurturing and love: we all want to show our babies how much we love them and feeding them is one way to do this.

“At the same time, we can feel a sense of rejection when our child turns down the food we have prepared for them. These emotions, combined with unrealistic expectations of how much food babies should eat, means that many babies – and older children – are regularly persuaded to eat more than they need. This can mean that the child simply learns to overeat or, in extreme cases, it can lead to problems such as food refusal or phobias; either way, the development of normal appetite control is at risk. Persuading young babies to eat food they don’t want is especially easy to do if they are spoon-fed. Babies who are allowed to feed themselves will naturally manage their own intake – they simply stop eating when they are full.”

In addition, the authors Rapley and Murkett assert that “spoon feeding can encourage babies to eat more quickly than they would do naturally, interfering with the sensation that tells them when they have had enough. Eating too fast is another food behavior that has been linked with obesity in adults and children.”

My response to this is four-fold:

1. I certainly have issues of insecurity in my life, but feeling rejection if my baby doesn't eat what I make is not one of them. Besides, Baby eats what we eat. Thus, even when spoonfeeding, it is my responsibility to be aware of and responsive to the reactions of my child. It's fairly easy to see when even a young baby wants more of a certain food and when they want nothing to do with it.

I have certainly gotten the impression that in the strict Baby Led Weaning approach, parents are assumed to be incapable of restraining themselves from force-feeding their children. I consider this a falsehood.

2. The first foods for a baby recommended by the Weston A. Price Foundation are a lightly coddled egg yolk with shaved liver and bone broth. Short of putting the bone broth in a bottle, how else do you give such soft, liquid-y foods to an infant? Letting them dip their fingers and lick it off would waste far too much of the food, in my opinion, given the level of ability in fine motor skills at 6-8 months of age. Again, no qualms here at letting them lick it off a spoon that I myself put up to their mouth.

3. There is an underlying assumption that if you're using a spoon with a young baby, you're feeding them purees. However, there are many other nourishing, scrumptiously yummy foods to offer infants instead, but they also sometimes require a spoon. (Sweet Marrow Custard With Vanilla Bean, anyone? )

4. Spoons are not evil. I expect my baby to be able to use one by middle toddlerhood, so why wouldn't I allow a spoon to be present as part of the learning process? To me, “spoonfeeding” refers not only to the parent literally spooning food into the baby's mouth, but also that it is a tool wielded by the child himself as part of getting food into his mouth. Licking, chewing, banging, dumping (preferably on the table or tray rather than on the floor, thank you very much), and stirring are all part of getting to know and master a very handy tool.

So, all in all, I certainly encourage Baby Led Weaning practices insofar as that it encourages parents to allow children to discover the joy of food, learn how to nourish themselves by using all their senses, and sub-consciously pay attention to their cravings. However, I differ from the movement when it comes to spoon feeding. Let us wield this tool well.

As the teacher and swordmaster, Don Diego de la Vega, says to his student, Alejandro, in the 1998 movie, The Mask of Zorro:

Don Diego de la Vega: You have passion, Alejandro, and your skill is growing. But… I must give you something which is completely beyond your reach.
Alejandro Murrieta: [angrily] Ah, yes? And what is that? [pulls out his sword to challenge Don Diego to a duel]
Don Diego de la Vega: [reaches into his hilt and pulls out a silver spoon] Charm.

4 thoughts on “Should You Spoon Feed Your Baby?”