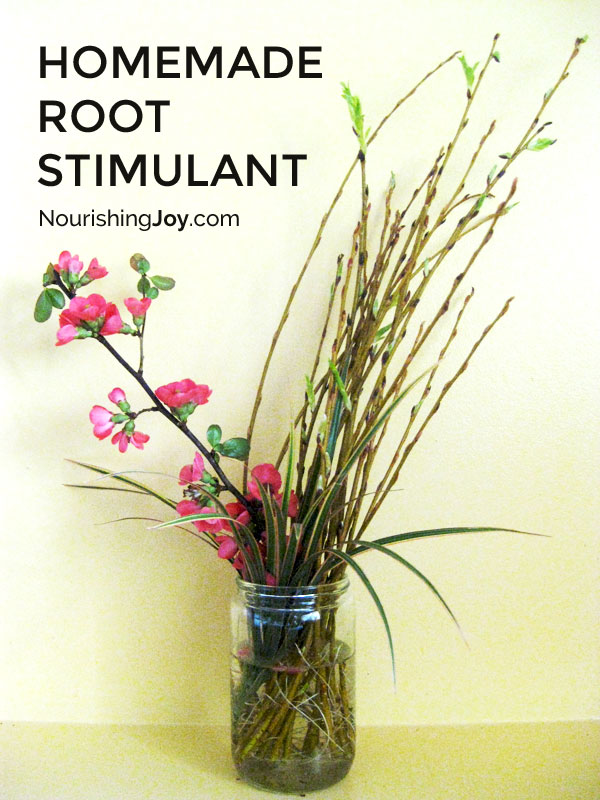 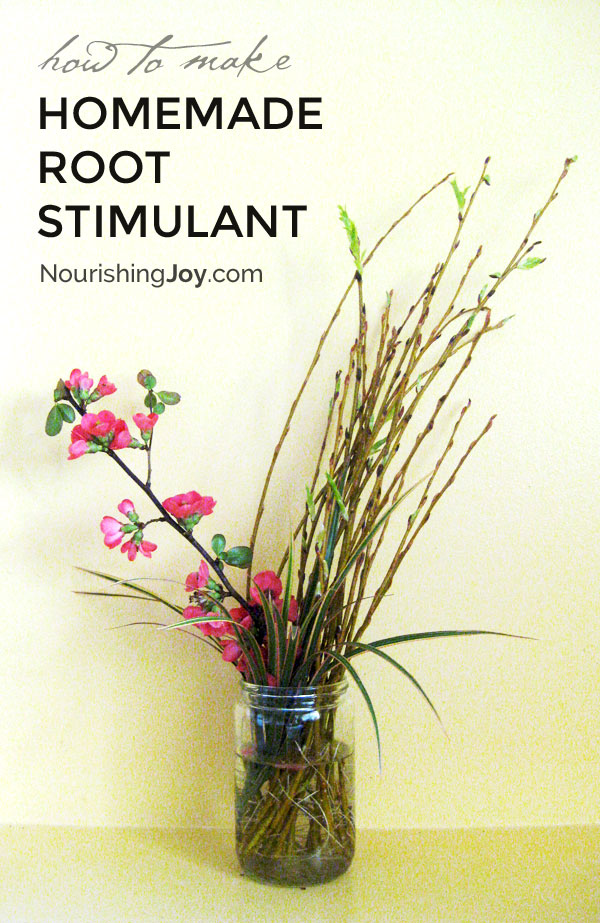 It's early spring – the ground is beginning to thaw here near the 49th Parallel, the land is turning green, and blossoms are beginning to appear.

Thus, it's the perfect time to think about preparing for this year's garden. Wahoo!

Of course, heirloom seed catalogs abound and you can start planning what kind of garden you want to grow this year and maybe even prep your homemade potting soil so you're ready to go when your seeds arrive.

In those instances, rooting hormone or root stimulant becomes your best friend.

The problem is, most commercial varieties of root stimulant include pesticides, which theoretically can be helpful so that nothing comes and munches your newly rooted plants while they're getting established, but overall are quite harmful, as they drive away worms and other essential, beneficial organisms AND can deplete your soil of needed nutrients. They also use synthetic plant hormones at times – not to mention that they can be expensive!

So, for all these reasons, I choose a natural, homemade version, that interestingly enough, has been the way plants have been rooted for centuries – AND provides its own self-defense mechanism for protecting the infant plant as it gets established.

Willow is fascinating, actually, and as I've learned more about it over the last few years, I consider willow trees to be an essential part of any homestead, if the land will support them!

Hippocrates himself wrote back near 400 BC that chewing the bark of a willow tree reduced pain and fever. Phamacological records of Egyptian pharoahs indicate that willow was used to treat fever even back around 2000 BC. Yet the effective compound in willow, salicin, wasn't isolated from willow bark until the late 19th century. Today, we know this ingredient as Aspirin (or ASA – acetylsalicylic acid – as it is known in many countries).

But while that is interesting in and of itself, it is the rooting properties that are especially fascinating.

Willow can help OTHER plants grow roots, know as the “willow rooting cofactor,” and it contains two substances in particular that make the rooting process work: indolebutyric acid (IBA) and the aforementioned salicylic acid (SA).

Indolebutyric acid (IBA) is a plant hormone that stimulates root growth and is present in very high concentrations in the growing tips of willow branches. When coppiced (cut down to ground level), willow can grow more than a metre in a single season, so its concentration of growth hormone is certainly evidenced!

In fact, according to The Reference Manual of Woody Plant Propagation, THE definitive text on this type of plant propagation (don't have a copy? grab one NOW!), willows have a rooting percentage of 90-100% and adding any other rooting hormones doesn't increase the success rate whatsoever – meaning, their hormones are strong and sufficient enough that no additional hormones are needed to propagate them.

Salicylic acid (SA) not only is beneficial for treating pain and fever, as mentioned earlier, but it's a plant hormone responsible for signalling a plant’s defenses, sometimes referred to as “systemic acquired resistance,” where an attack on one part of the plant triggers the plant’s internal defenses in other parts of the plant, namely a resistance to invaders.

(It's a plant's version of a medieval castle raising its drawbridge and filling the moat when there's a sign of an attacking horde approaching. This response is strong enough that it can effectively protect other nearby plants, at times, as well.)

So, this is what makes homemade root stimulant made with willow so effective: not only does a cutting need to be given incentive to grow strong roots, but it needs to protect itself from infection by both bacteria and fungi, two very common threats to newly propogated cuttings. By infusing water with these two potent natural substances from willow, plants can better fight off infection and grow hardy roots that will sufficiently feed and nourish the plant once it's transplanted.

And even better, a little bit of willow can go a very long way. Once you have one willow shoot, you can easily make more to have a ready supply. Merely root the willow shoot in water, plant it, and at the end of the season coppice it. Now you have a cut shoot with which to make more willow water, but the coppiced stump will also grow a whole collection of new shoots the next spring. You can even do this mid-season.

Check out this willow fence my permaculture design-loving husband built from willow that he started with just a handful of shoots rooted in a 5-gallon bucket only a year before: 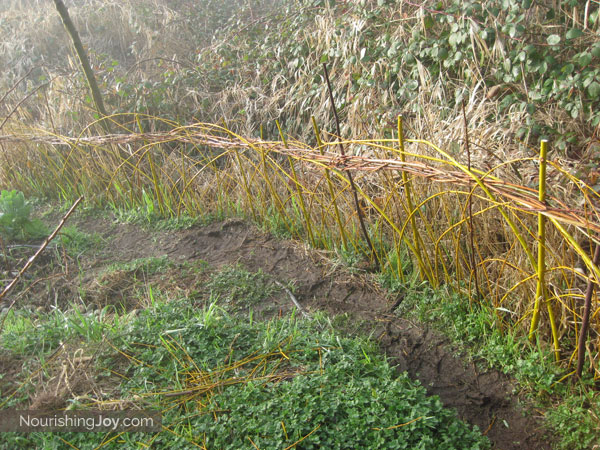 And, due to both indolebutyric acid and salicylic acid, willow fences around a garden help provide a sturdy barrier to repel pests of multiple kinds!

Oh, and one last note before we move on – do you see the photo at the top of this article, the one with willow branches in a jar with a quince cutting and a spider plant? Do you notice how clear the water is?

That picture was taken when the willow had been in the water for 29 days and the quince had been there for 12!!! It was part experimentation and part forgetfulness, but it was living proof that willow cleans the water, as is known when it's next to ponds or standing water (similar to cattails). 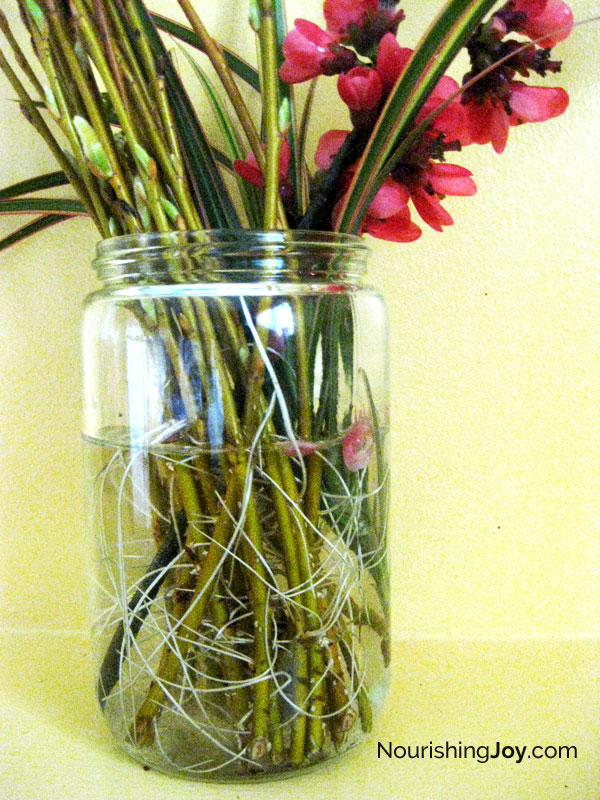 As you can tell, I'm thoroughly impressed and fascinated with how willow is designed to be SO beneficial – and so practical – within the plant kingdom.

But, enough. We need to get on to our recipes!

Take one young willow shoot, removing any leaves, and cut it into 1-2″ pieces. Half-fill a quart-sized mason jar with the pieces and pour freshly boiled water over them, as if you were making tea.

(You may use any willow variety – if it has Salix in its Latin name, it is sufficient for this purpose. Also, the bark should be yellow or green. If the bark is brown or gray, it is too old.)

Steep for 8-12 hours, then strain and compost the willow pieces. The willow water root stimulant is now ready for use.

Store in the refrigerator for up to two months.

Take one young willow shoot, removing any leaves, and cut it into 1-2″ pieces. Half-fill a quart-sized mason jar with the pieces and fill the jar with cool or tepid water.

Let sit for 5-7 days, then strain and compost the willow pieces. The willow water root stimulant is now ready for use.

Store in the refrigerator for up to two months.

If you're not in a hurry:

Place several young willow cuttings in a jar along with freshly-cut cuttings you'd like to propogate and fill the jar with water, making sure no leaves sit below the water's surface.

Let sit until the cutting forms roots at least 1″ long, 5-30 days. New cuttings may be added to the jar if the water is still clear.

How to Use Homemade Root Stimulant:

To use, pour a few inches of homemade root stimulant into a jar and place healthy cuttings into the water as you would flowers in a vase. Let sit until roots form, 1-7 days.

Please note that while willow water has been shown to be consistent more than 90% of the time, it may not perform 100% of the time, in which case a new batch will be needed.

You may also place cuttings directly in your potting soil or planting medium and then water them using the homemade root stimulant, but I've only seen mixed success on this method (although it's certainly much much better than just watering with water when you're trying to stimulate growth!).

On a similar subject and with a similar method, see Mommypotamus' excellent How to Grow Elderberries from Cuttings.

How to Find Willow Shoots if You Don't Already Have Any

Part of the reason for doing this is to save money, so don't buy willow if you don't have to (and if you do, buy as little as possible).

Or what are your ideas? If you have an idea on how to get willow shoots ethically for free, PLEASE share in the comments below!

What is your favorite plant to propagate? Or – what plant would you love to propagate if you could?

9 thoughts on “How to Make Natural, Homemade Root Stimulant”