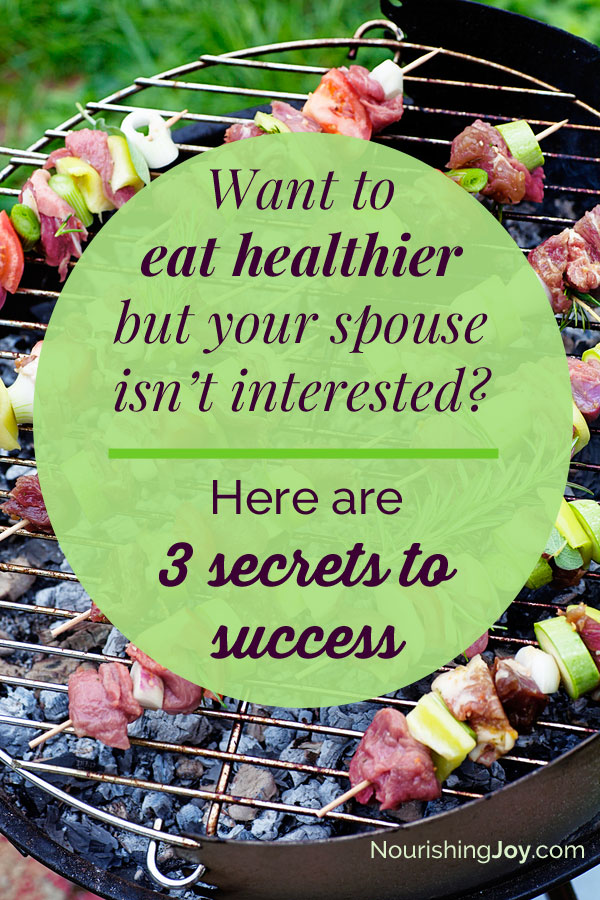 You may not know this, but I *cherish* hearing from you. So when I've put out the all-call several times in the last few years to tell me what your greatest challenges are and how Nourishing Joy can help you meet that challenge, I am absolutely humbled and honored by the honesty you all share.

I also find it incredibly enlightening to see how many people share the same challenges and frustrations.

For example, today's topic is one that has been mentioned several times over by many of you. As one reader said on Facebook a few months ago,“How do I get my hubby and family on-board with ‘natural living?' I want to embrace it more, but them – not so much.”

How do you get your husband and family on-board with real food? Here are 3 keys to success.

So, today here are three thoughts for getting your partner on the same page (on any difficult issue, really) – in this case:  natural living and real food.

This one isn't terribly creative, but it's vital.

Especially if you feel sabotaged or misunderstood, talking it out is of utmost importance. And whether that's one long sit-down-and-hash-it-out conversation or an on-going conversation that happens in snippets over several weeks or months, it's up to you and what works best in your marriage.

No good, lasting, synergistic change can come from manipulating your spouse, especially when you're looking to incorporate long-term changes.

In that conversation, there are two things that must happen: one, you must feel heard on what excites you about the changes you want to make (or are making), and two, you must hear what concerns your spouse has.

On your part, share what's on your heart and mind.

Are there family concerns, such as health issues, behavioral issues in a child, or food allergies, that drive your desire to live more naturally?

Or is it a more general concern about toxins in our environment and possible long-term effects?

Or perhaps a desire to live more frugally?

Or support your community by buying local?

As for hearing your spouse's concerns, hear those critiques and worries honestly too.

Is it that the status quo is changing?

Does it require something of him or her that will take time or effort?

Is there a social stigma of some sort at play?

Are they afraid that the changes you want to make now may become a “slippery slope” to making other undesired changes later?

Whatever the concern is, hear it honestly and be willing to work with it. If nothing else, having his or her concerns heard may make them more willing to try your new way of doing things. (It may also take some time and multiple conversations to actually pinpoint or uncover what those concerns are, so be patient.)

After honestly figuring out what your spouse's concerns or trepidations are, meet them where they are. This may mean you'll have to make changes more slowly than you want or you'll end up only making the changes yourself.

When I was pregnant with our first child, we knew we wanted to be as eco-friendly as possible, but we were totally overwhelmed with all the diapering options, so we decided to just have the baby and make our decision once we felt like we had our feet under us.

When our daughter was six-months-old, I decided the time had come, so I went and bought a small stash of cloth diapers. I had no idea what I was doing and used them completely incorrectly and I didn't know how to show my husband how to use them, either.

So for a few weeks, my husband had no desire to use the cloth diapers. I figured that even if I used them just once a day, we were still saving money on disposables and doing something as a step in the right direction. But one day, when he was on diaper duty (and I wasn't around to tell him he was doing it wrong), he decided to try the cloth diapers that were sitting next to the change table and discovered it wasn't as bad as he thought.

After that, HE was the one who implemented using cloth diapers at night and who urged me to buy a full, proper stash so we could cloth diaper full-time. I was still the one who did the diaper laundry and who took the time to research and try 200+ brands to find what worked for us (yes, I was obsessed), but the point is that once he had had time to get used to the idea and try a small change on his own, he was very willing – even eager – to make bigger changes.

A second illustration along these lines is more specifically about finding common ground as a way to introduce your ideas.

About the time I was starting to discover the traditional foods movement and wanting to get “back to the land,” so to speak, my husband was becoming disillusioned with his job of more than 15 years in medical research. He loved the science and being involved in disease research, but he felt more and more than his job had less to do with finding cures and more to do with merely funding pharmaceutical company pockets.

So while I was spending my evenings reading the few real food and homesteading blogs that existed then, he was spending his evenings searching Craigslist and job sites for other jobs in his field. Through that, he starting stumbling across sites about natural medicine, organic food and how it relates to disease and healing, organic gardening, soil science research, and even certain lines of political thought.

From the outside, it looked like we were reading about very different things. But over the course of a few months, it became more and more common that I would mention something I had read on a food blog and it turned out he had just read something similar or related on one of the sites he was reading.

The more and more our conversations overlapped, the more willing I was to hear some of the seemingly  “way out there” ideas that were starting to hatch in his head and he was more willing to hear the ideas I was entertaining. The next thing we knew, we were making soap and growing mountains of food on our tiny urban balcony.

(This picture was taken shortly after we planted, so it shows a fraction of what was growing there a year later! Here's what's growing in this picture: honeyberry, strawberries, lettuce, multiple herbs, rhubarb, lentils, lavender, carrots, rosemary, corn, beans, and tomatoes. There were also spinach, nasturtiums, sweetpeas, poppy seeds, and tobacco just off camera. 🙂 ). 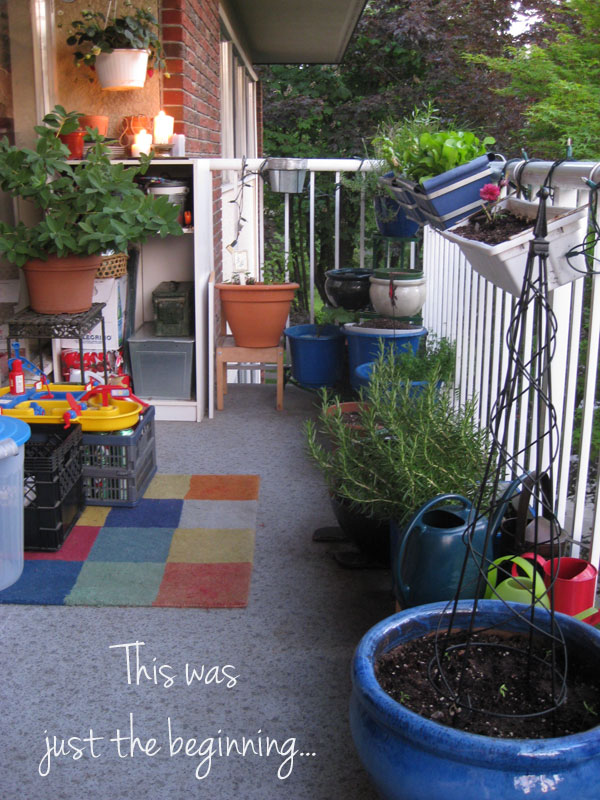 So again, the point here is – find a way to put YOUR thoughts into the context of what your spouse thinks and cares about. They'll be more synergistic that way too.

3. KEEP SERVING YOUR FAMILY'S FAVORITE MEALS… JUST GIVE THEM A MAKEOVER

Food is often a source of contention, largely because we eat not just to fuel our bodies, but to comfort ourselves and to feel good emotionally. How many of us love a bowl of beef stew in the winter because it's the ultimate comfort food or enjoy an ice cream cone on a hot day because it satisfies deeply in that context?

Making changes to family meals can actually be quite stressful. As the cook, it can cause stress because you're trying to implement new techniques or new recipes. For those you're feeding, it can be stressful because they're not necessarily seeing their favorite meals or enjoying the same accompaniments.

The best way to combat this is to find real food versions of your family's favorite meals – whether they're homemade versions of fast food take out or just healthier alternatives to recipes that use processed, boxed, or canned ingredients.

For example, find ways to make that casserole your family loves by substituting milk, butter, eggs, or cream in place of the can of cream of mushroom soup. (You can also make up a real food version of that particular ingredient, like making your own condensed cream of mushroom soup base.)

Or instead of buying your family's favorite frozen pizza, make Family Pizza Night take on a new meaning by laying out ingredients and everyone makes their own personal pizza. It takes significantly longer, but there can be rich rewards derived from it – and not just a healthier meal.

So, now I want to hear from you: What's your family's favorite dish or food item that you've madeover with great success (or not)?