Today I have the unique honor of hosting a giveaway from one of my favorite organic companies AND spotlighting an important current event, all in one!

I delve into politics here at Nourishing Joy only very rarely, but an important upcoming initiative compels me to break my political silence.

The current event? GMO's. Heard of 'em? Yup… genetically modified foods, which currently have no requirement in the US or Canada to alert consumers to which foods contain genetically modified ingredients, despite the serious health risks they pose and despite the fact that nearly every other developed nation in the world already requires labeling.

GMO's have been increasingly appearing in our foods over the past 25 years – many of which we don't even know about. Genetically modified soy, for example, is estimated to be present in more than 70% of all food products found in US supermarkets, including cereals, condiments, soup, breads, pasta and most meat, due to the fact that many conventionally raised animals are fed feed containing genetically modified soy.

To find out more about genetically modified foods, visit The Center for Food Safety, the Institute for Responsible Technology, or Just Label It.org. You can also read Seeds of Deception by Jeffery Smith, watch Genetic Roulette – The Gamble of Our Lives online, or download a Non-GMO Shopping Guide.

To make your own informed decision about Prop 37, don't miss this excellent article at Forbes.com.

Proposition 37, currently on the ballot in California, proposes legislation that would require the labeling of genetically modified foods (GMO's). The initiative only requires GMO's be labeled – it doesn't effect whether GMO's are used or not.


And therein lies the reason I want to support this proposition here – an important part of being able to live simply and intentionally is being able to make informed decisions.

And this initiative has the potential to affect us all, even if we don't live in California. California will create a precedent that will make it significantly easier for other states to follow suit.

As we can tell by the millions Monsanto has spent in trying to keep Prop 37 from passing in California, this initiative is a big deal. 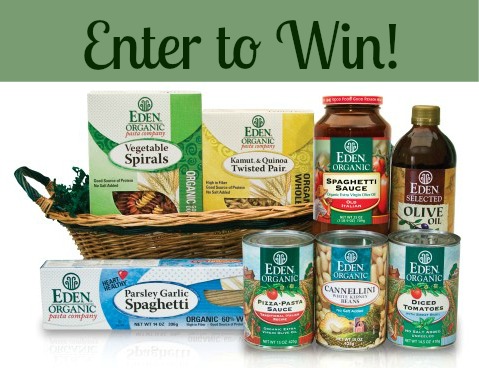 So today I'm hosting a giveaway in support of Prop 37, courtesy of the lovely people at Eden Foods.

Eden Foods has long been one of my favorite brands for hard-to-find organic foods, such as organic barley malt and organic soy sauce, as well as organic convenience foods, such as refried beans and pasta. Several of their specialty products are regularly in my kitchen, including French sea salt, umeboshi plum vinegar, and traditionally brewed Japanese mirin.

Their company ethics are to be held up as an example in the industry and the quality of their products is undeniable. Can I hear a woot, woot from the peanut gallery if you love Eden Foods as much as I do?  I must admit I was so incredibly excited when the opportunity came through for me to host this giveaway with Eden.

Eden has been part of The Non-GMO Project since its inception and has been actively avoiding GMO's since 1993.

Today they're offering a $40 organic pasta gift basket to one lucky winner. (See the full description here.) The  basket includes:

How to Enter to Win

This giveaway is being held in order to raise funds to support Prop 37, but donating is completely optional. Making a donation is encouraged but not required to win.

Any funds raised will be used for purchasing TV advertisements, billboards, radio ads, and other media to get the word out about labeling GMO's. Considering Monsanto and DuPont have already spent considerably more in their own advertising, every dollar helps in helping spread the word.

(2) Leave a comment in the form stating why you do or do not support Prop 37 OR make a voluntary donation of any amount to Yes on Prop 37 (strongly encouraged).

PLEASE NOTE: This sweepstakes is open to US residents only; residents of Florida, New York or Rhode Island are not eligible.

The giveaway closes at 12:01 a.m. EST early Saturday morning, Oct. 20. The winner will be announced within 24 hours and the winner will have 72 hours to contact me to claim the prize.
a Rafflecopter giveaway